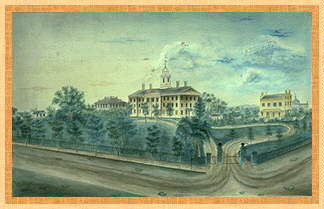 Responding to New Jersey Public Law 303, which established the ability of New Jersey state employees to formally bargain for their contracts, the Presidents of Rutgers University's three American Association of University Professors (AAUP) chapters sent a letter to their faculty colleagues on October 15, 1969. This letter announced the formal creation of the Council of Rutgers AAUP Chapters (RCAAUP) and their intent to become the "sole bargaining representative" of Rutgers faculty. They organized a successful recognition campaign to be acknowledged as the faculty's bargaining representative and had faculty members sign a card designating the RCAAUP as their bargaining agent. David L. Cole of the American Arbitration Association certified the card check on February 2, 1970, and the first negotiations with Rutgers University soon commenced. Two years later, in March 1972, graduate students joined the bargaining unit.

The initial contract, the Agreement between Rutgers-The State University and Rutgers Council of the American Association of University Professors Chapters, 1970-72, addressed the creation and function of the RCAAUP as the bargaining agent for Rutgers faculty, the regularization of grievance procedures, and faculty salaries. Throughout the 1970s, the contracts and negotiations expanded to include teaching assistants and graduate assistants in the bargaining unit, benefits, university life, Rutgers University regulations and practices, and discrimination. Often, the RCAAUP endeavored to incorporate issues into the contract that the Rutgers Administration declined to negotiate, like the topics relating to co-adjunct faculty and agency shop provisions. The bargaining relationship between the RCAAUP and the Rutgers administration quickly became tumultuous; fact-finding on economic issues occurred during the negotiations for the contract covering 1975-1977, and there were rumors of a strike circulating in March 1976. The 1977-1979 Agreement, which expired on June 30, 1979, went to impasse on economic issues and was not signed until March 1, 1979.

Bargaining sessions during the 1970s witnessed the RCAAUP and the Rutgers administration attempting to negotiate the boundaries of their new relationship. There was an uncertainty about locus of negotiations and power between the New Jersey legislature and state administration in Trenton, the administration at Rutgers University, and the role of the RCAAUP on behalf of Rutgers University faculty and graduate students. During the negotiations for the 1975-1977 contract, the aforementioned fact-finding on economic issues occurred on a state level, in conjunction with other state bargaining unions; later, during the 1977-1979 contract negotiations, the proposed economic plan went to the state of New Jersey for approval. One finds questions of negotiability and the meaning of 'permissive' bargaining topics more prominent in this decade, although the RCAAUP and Rutgers administration continue to debate these topics throughout the entire history of bargaining. The short-lived Rutgers University Delegate Assembly was created to represent the university faculty and inform the RCAAUP's negotiations committee, Committee N, of bargaining priorities and faculty concerns. However, the Delegate Assembly did not last, and the RCAAUP relies on faculty correspondence, department representatives, faculty caucuses, and surveys to ascertain faculty and graduate student concerns and priorities.

Two opposing forces shaped bargaining in the 1980s: the desire to make Rutgers University an internationally renowned research institution and the problem of chronic state under-funding. Serious discussions about the possibility and procedures for faculty lay-offs, referred to as reduction in force, threatened salary rollbacks, and hiring freezes occurred simultaneously with discussions of extended salary scales for high-demand faculty and disciplines, out-of-cycle raises to retain faculty, and the creation of named university professors, special titles, and endowed chairs to recruit faculty "superstars." Special negotiations were held to address faculty dismissal procedures, extra compensation for department chairs, and special salaries for select faculty. Often, waiting on financial and budget information from the state of New Jersey hampered negotiations on economic issues.

Contractual bargaining occurred along established patterns until the mid-1990s. The protracted negotiations for the Agreement Between Rutgers, the State University of New Jersey and Rutgers Council of the American Association of University Professors Chapter, 1995-1999 included the possibility of a faculty strike, student upheaval, public outreach efforts by the union and administration, and culminated in fact-finding in late 1997. No single element of negotiations was unique to this contract, and the 1996 mediator characterized the fundamental problem as the "absolute distrust" between the RCAAUP and the Rutgers Administration. The resultant bitterness and vitriol lingered, and everyone desired to avoid a repeat during the bargaining for the 1999-2003 Agreement.

The negotiations in 1999 witnessed the first contract settled before the expiration of its predecessor. The RCAAUP and Rutgers administration experimented with a bargaining technique called "mutual gains bargaining." The faculty overwhelmingly rejected the administration's initial salary offer in May 1999, but they accepted the final contract in July 1999. However, after the settlement of the 1999-2003 Agreement traditional bargaining patterns resumed, although the contracts have not been as delayed as the 1995-1999 Agreement.

The Bargaining and Negotiation Files of the Rutgers Council of American Association of University Professors Chapters date from 1967-2004; the bulk of the material covers the period between 1974 and 1997. The records consist of 16.4 cubic feet of material stored in 16 records center cartons, one manuscript box, and one oversize box. The papers contain material generated by the formal bargaining relationship between the RCAAUP and the Rutgers administration. The collection is divided into series based upon the subject of negotiations, usually the Agreement Between Rutgers, the State University of New Jersey and Rutgers Council of the American Association of University Professors Chapter. Several series contain discrete groupings formed by self-contained negotiations on a particular topic, like extra compensation for select faculty; however, only material unconnected to the contract or contractual implementation, namely the negotiations related to University Regulations 3.70-3.90, have been delegated to a unique series.

Correspondence and memoranda dominate the documents. One also finds agendas and minutes, proposals, articles, legal documents, press releases, budgets, memoranda of agreement, publications, loose notes, surveys, by-laws, ballots, petitions, and contracts. The majority of the documents directly relate to the RCAAUP and Rutgers University; however, some concern the state of New Jersey, particularly as state legislation and budgets affect Rutgers University, and a few documents relate to the National AAUP and other unions.

The bargaining relationship between the RCAAUP and the Rutgers administration deals with every negotiable aspect of faculty and graduate student existence and often touches upon non-negotiable topics. Perpetual topics of negotiation include the grievance procedure, salaries, and the role of merit pay (variously called the supplemental salary program and FASIP). Other common topics include fringe benefits, workload, faculty dismissal procedures, and parking. Often, one can observe broad academic concerns manifesting within the specific milieu of Rutgers, like the discussions of intellectual property, post-tenure review, discrimination and affirmative action, and intellectual property. The RCAAUP regularly endeavors to include individuals or topics within negotiations, like part-time faculty or agency shop procedures in the 1970s, that the administration refuses to discuss. Conversely, the administration works to narrow bargaining concerns by attempting to remove individuals, like department chairs, from the bargaining unit or declaring topics non-negotiable.

The bargaining minutes between the RCAAUP and the Rutgers administration and the minutes of the RCAAUP's bargaining team provide a good overview of bargaining issues and concerns. Commonly, topics that emerged in bargaining are not in evidence in the final contract. However, some contracts lack minutes and most extant minutes contain lacunae.

A researcher interested in the process of bargaining between the RCAAUP and Rutgers University ought to consult the President's Office Records of the RCAAUP (R-MC 090/2), especially the GIBSON FILES, KEDDIE FILES, and O'CONNOR FILES. The James P. Begin Papers (R-MC 048) includes materials related to early bargaining in the 1970s.

Bargaining and Negotiation Files are divided into fifteen series. Each series is arranged alphabetically.

Some records in this collection are restricted in access due to the confidentiality issues involved in the individual faculty grievance cases which are interspersed throughout the collection. Please contact in advance for access to this collection.

When received, the files were associated with a particular contract cycle and typically in a titled folder. Titles have been retained, albeit sometimes clarified by expanding an abbreviation; material grouped together via binder or accordion file has remained joined through by using title and sub-title on the pertinent folders. Material received loose has been organized thematically by the processor.

The materials in UNIVERSITY REGULATIONS 3.70-3.90 were found in a separate location, are self-contained, and do not directly relate to a contract. Therefore, the processor placed them in a separate series. The SUBJECT FILES were found with bargaining files, but it was impossible to ascertain if they were being used for a specific contract or contractual issue.

The processor has reduced the bulk of several folders by removing publications found intact and without notation. Duplicate material, such as Executive Council minutes without annotation, has also been removed from the collection. Ballots have been discarded, although ballot totals and comments have been retained.

Oversize materials have been stored separately.

This section provides descriptions of the materials found within each series. Each series description is followed by a container list, which gives the titles of the "containers" (for example, folders, volumes, or cassettes) and their locations in the numbered boxes that comprise the collection. The availability of any digital items from a container is indicated with a hyperlink.